Calls are growing for improved productivity of equipment that uses invertors, such as machinery at production plants and factories, and conveyor cranes at seaports. Accordingly, invertors that feature high performance and multi-functionality are increasingly in demand. In response, Fuji Electric Systems is releasing the FRENIC-VG series of inverters that feature a speed response of 600 hertz, six times the level of the company’s previous models. The series achieves the high precision and detailed control required by production plants and equipment to control response speed during vector control, thereby further raising production efficiency. Fuji Electric Systems is offering a wide range of models in the high-performance FRENIC-VG series of vector control*

*invertors to contribute to improving the productivity of customers’ production facilities and equipment. 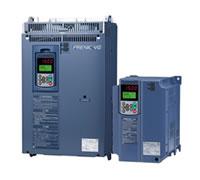 Features of the series

The FRENIC-VG series can be used in the following applications that require high-precision and detailed control:

The use of additional components and options are often required to realise a suitable solution for demanding applications and extended technical outline conditions. The following supplements are available for the various Fuji Electric inverter series:*

*Accessories and option-cards depend on the inverter series. More information can be found in the catalogues - see Downloads.

Comprehensive options are available, particularly for the FRN-G11S series, for example motor feedback and fieldbus interfaces (for Profibus-DP, Interbus-S, CAN open, Device Net, Modbus Plus)